So, I finally bought a Tarot deck after months of being pretty interested in having one.  I've always been curious about the process, the imagery, and the art of linking together disparate images into a story that might affect someone for the better.  I guess that's why I'm a writer.

Last week I told the universe that if I got an extra $20 randomly, I'd finally buy that deck I've been picking up and looking at for months.  Over Easter, I visited my mom.  In addition to loading my freezer with goodies from Schwann's, she handed me three twenty dollar bills.  One was spent on gas.  One will be used for refreshment at work.  And one bought my tarot deck--an original Rider-Waite 78 card deck.

I looked at several different kinds, but the symbolism and history of that deck really appealed to me.  I wanted something classic, something with years and years of meaning and practice behind it...  something I could Google the meaning of with concrete descriptions of what things mean.  Tuns out my deck came with a handy little book and a mat for spreading cards on.  Dynamite.

Now, I've frequented a website that does free three card readings with a single click.  Check it out if you'd like:  CLICK HERE.  It has been spookily helpful.  Granted, with a three card spread, you only get past, present, and future (or setup, now, and goal), but honestly, sometimes less is more.  This deck, however, explains the classic ten card spread, what each spot in the spread should mean or how it can be read, and what order they get filled.

I'm sure the internet is laughing at my lack of knowledge already.  But hey, I was raised in a religious household, and Tarot cards were EEEEVILLL.  I still believe the things I was taught as a child about God and his son and Heaven and all that, but over the years my belief structure has changed enough to allow for intellect and doubt.  So I don't believe there's anything inherently EEEEVILLL about Tarot cards.  Ouija boards?  YES.  Those things are spooky as fuck and open doors to places we can't close ourselves and invite things into our homes that we can't get rid of and don't want to stay.  But Tarot cards are more of a counseling mechanism, something to help you think through a situation and arrive at a conclusion that makes sense, given all angles of something.

Anywho.  Enough about my beliefs.

I know the common belief is that you can't self-read, but who the hell is gonna do it if I don't?  So, I read.  Ten cards.  Laid out like a cross.  You know the drill.  Here's a photo: 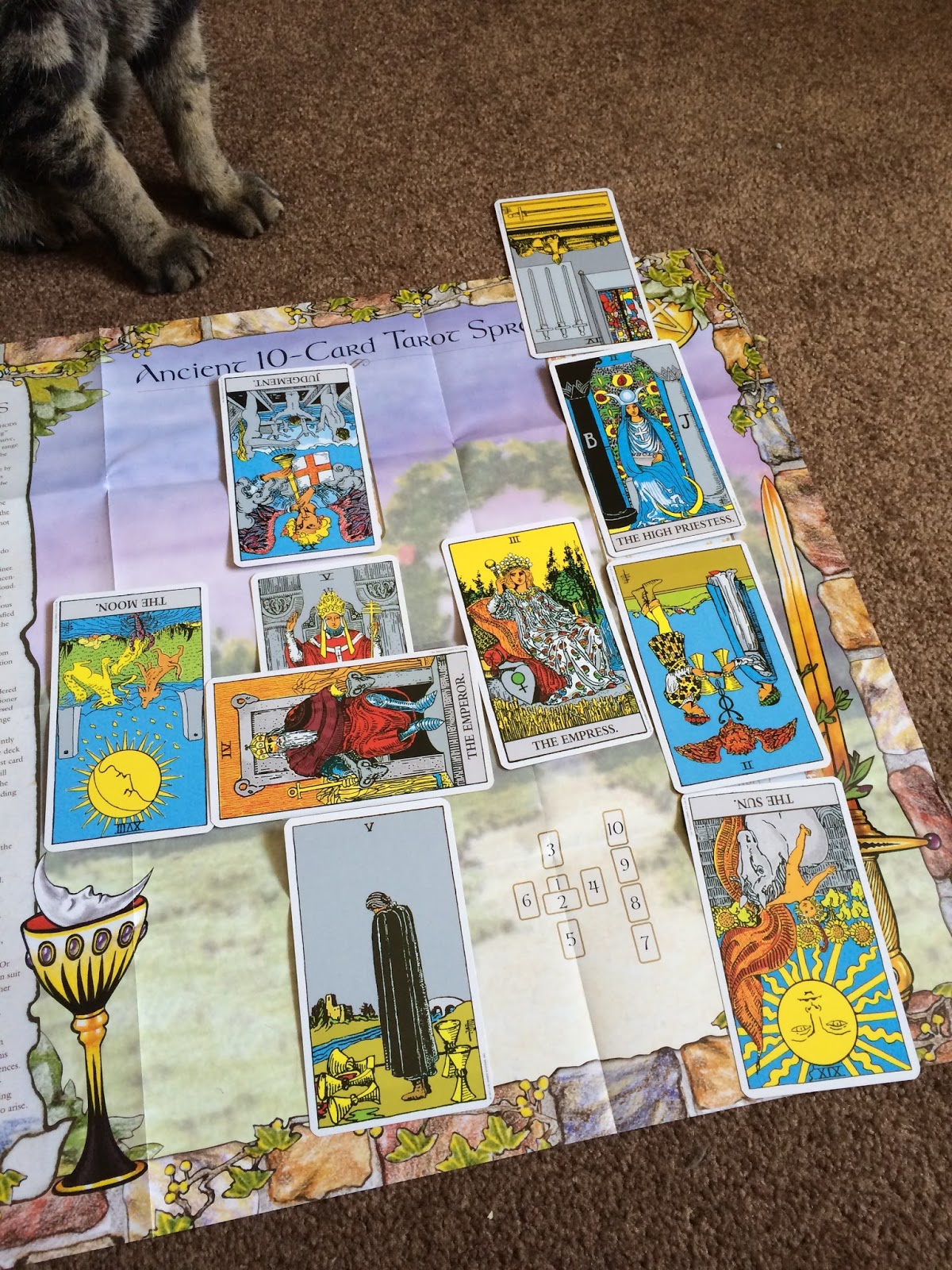 The cat is my full-time help.  Clearly.  Now, I'm not gonna go into what this spread meant, because it's WAY personal and, as you might be able to discern, has to do with marriage and secrets and sacrifice and whatnot...not to mention it would take DAYS to explain the backstory and what it all means to me (which is the beauty of the Tarot), but suffice it to say that it wasn't a great reading.  It was pretty right on, honestly, but not quite what I wanted or expected to hear.

Anywho...then I did a reading, just three cards, past present future, like that little website, and I focused on the deck, what it meant for me, and what it might bring in the future.  The past card had to do with a breach of faith (my fear at buying a deck because...EEEVILLL!) and shame and all that.  The present card showed a bond being formed, a positive relationship forming (perhaps my own deck), and the future card showed that the time was right, that now was good, and that I shouldn't be ashamed.

I wish I hadn't put them away before I committed what cards they were to memory.  Oh well.  Transience, passing fancy, and all that.  But it was an exceedingly GOOD reading.  And revealed some monetary gain, perhaps, in that relationship.

I feel like an infant in the Tarot world, but I'd love to have some more experience with this in the future.  And for the naysayers, meh.  Do what you like.  I'll do what I like.  We'll live and let live.  Leave it for God to sort out in the end.

At the end of this, I drew a single card for this blog post.  The Lovers:  symbolizing attraction, love, beauty, and trials overcome.

And that's a great place to stop.

I really don't know anything about tarot cards. I do find it fascinating to look into the history of things such as this, that have survived over generations...but apparently I've never been fascinated enough to really look into it. Or never really known someone who was into it enough to give me a boost into research. Initial thoughts include my skepticism (I am a trained auditor, after all) at whether truth or a sense of resonating could be found no matter how the cards turned. Kind of like how we can splice words to find truth in any horoscope as well. But I also recognize there's something there. Maybe it's a power from the universe itself or something. Hmm.

I don't really believe in a "power," per se. I do think that there is a collective unconscious that we can all tap into and are all connected to whether we know it or not. But...really I think about the same as you do. They're useful for seeing through a situation, a sort of inexpensive counseling, a guided meditation on a situation and the possible outcomes or different facets of it.