So then I get called in to talk to the head of the HR department for not being happy about being lied to and talked about behind my back.  No.  Really.  They told me to get happy or get fired, basically.

So now I'm job hunting.  I'll take another crappy part-time job.  I just have to get the hell out of this fucking nut house.

Out
Posted by Viewtiful_Justin at 10:10 AM No comments:

Lately I've been having doubts.

Let's go back.  A month or more ago I heard that one of our full-time tellers was leaving the bank.  I alerted the relevant parties that I was interested in her position, since I'm part-time.  There was only one other person at our branch who would have been more qualified for the job than I am.  She told me she didn't want the job.  Wasn't going to apply.

So I waited.  And her last day approached.  It's still approaching, actually.  And I didn't hear anything.  And I wondered if maybe they were just going to break it up into part-time positions.  And I told friends and others that if I wasn't hired for it, I would be quitting, because if they aren't going to hire me when I'm so obviously qualified and interested, then they never would and I could stop waiting around for that.

Finally, I got an email last Wednesday from the head of HR at the bank asking me to call her.  So I did. I figured, "Hey, good news, finally!"

"The position has been filled."  By my best friend at the bank.  The one who told me she wasn't even interested and wasn't going to apply for it.  And I was furious.  Still am, actually.

And I'm having doubts about my future.  Like...in general.  Right now, I just want a different life.  I'm not happy.  My routine is dull.  My prospects for the future are fairly bleak.  And I'm just tired of everyone around me and all the bullshit every second of every day.

I'm turning into my father.  And if you know me, you can guess my opinion about that fairly easily.  He's a miserable old fuck who doesn't like anyone or any thing but himself.  And everyone else is a stupid asshole, a fucking idiot, or some other colorful epithet that stops him from having to deal with life in the same way as any normal person.

I don't want to be that miserable old fuck.  But I can feel myself scabbing over and losing the desire to participate in anything at all anymore that isn't strictly comfortable and easy.

It's coloring my conversation, my relationship, and definitely my attitude about work, especially right now.  And there doesn't seem to be very much light at the end of this particular tunnel.

Even just writing this feels like something people will roll their eyes at and go, "More of this?  Is he ever happy anymore?"

And even writing that feel like more of the same.  I just need...something...a long walk by myself...and change.

Out
Posted by Viewtiful_Justin at 2:32 PM 2 comments:

from "American Wedding" by Essex Hemphill

"Every time we kiss we confirm the new world coming..."

Out
Posted by Viewtiful_Justin at 9:07 AM No comments:

Out
Posted by Viewtiful_Justin at 12:21 PM 4 comments: 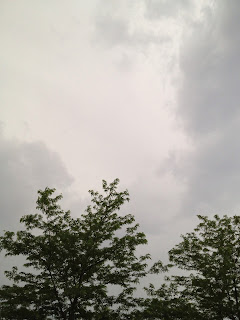 
No, seriously.  Slow down.


I know your eyes scan these words on the way to things that have to be done today.  You are racing from one thing to the next.  Just take a moment.  Slow down.