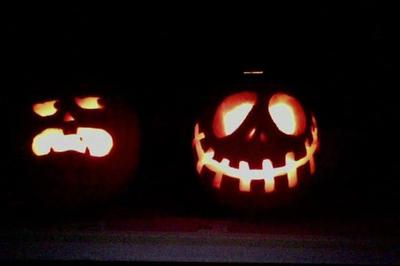 We carved pumpkins last night.  Remember when people did that?  Robb is actually surprisingly good at this.  Each year we've done it, I've ben way impressed with his designs...free hand with no stencil on that Jack Skellington.  And my pumpkin is like, "Yeah...shut up.  I'm a pumpkin, too."  I love his grumpy little face.

But that got me thinking, as I do.  Ever since companies started selling strings of orange and purple and green lights just for Halloween, along with inflatable lawn crap and light up, pre-carved, plastic pumpkins, Halloween decorations have been LAME!  Remember when your dad would build the dummy and put it out on the porch, milk carton with a mask on for a head?  Kitchen knife in its chest?  Ketchup.  Home-made tombstones and those lame ghosts made from towels and socks or Kleenex and Tootsie Pops?  Remember that?

Now I drive to work and I see orange pumpkin party lights, light up pumpkins in windows, giant inflatable Winnie-the-Pooh made up like a pumpkin in the yard...nothing with any character...nothing that isn't store-bought and just the same as the decorations three houses down...and does ANYONE still carve pumpkins?

I'm only 28 years old, but I feel like a grumpy old man when I say things like this and people look at me like I'm nuts.  There's just no charm to the holiday any more.

Posted by Viewtiful_Justin at 9:24 AM

I feel exactly the same way. We weren't allowed to do Halloween in my family so I missed out on the excitement, and now looking at adults all trying to relive some of the magic of childhood it just seems so forced. Besides, most of my year is spent being super creative. Halloween should be the one day of the year when some of us get to be normal.

First, I love both of your pumpkins. Robb's definitely is great, but so is yours. I esp. like the side-eye :)

I have to admit, though, that I haven't carved a pumpkin in ... five years? I just haven't been in the mood :|