Getting to Know My Town Via Bike...

Note: This is a port from my other blog...Just so you know.


It's funny how much different a town you've known all your life seems once you get on a bicycle.  I've started paying more attention to sidewalks, how busy an intersection is, and where the trees hang low--things I never really noticed before.  It's a blessing to have a long stoplight instead of a reason to shake my fist at the sky and wish I were home.

Yesterday and the day before I spent a few hours on my bike, just cruising around town.  I thought it might be nice to share it with you.  I know...me, posting photos?  It's unheard of!  I think now would be as good a time as any for a blanket apology in that department.  I apologize for neglecting that part of my blog for quite some time.  I remember when every post had at least a little something from my camera.  It's not like I've stopped taking photos.  I take them all the time.  My camera comes with me everywhere.  It's just a matter of getting them from my computer, where they upload on my camera dock, to Robb's where I connect to the Internet.  And before you try to suggest I upload them to Robb's computer or I get my computer on the Internet, I'm just going to say no.  No.  My computer won't connect wirelessly.  And his computer won't take my photo software.  So.  Blah.

Anywho...I apologize.  Some days it just doesn't seem worth the effort.  I'll try to pick it up in that regard.

Gosh...I typed all that and my photos SILL haven't finished uploading...

There we go!  And...ummm...it uploaded one photo three times and left one out.  And you all wonder why I don't do this more often... 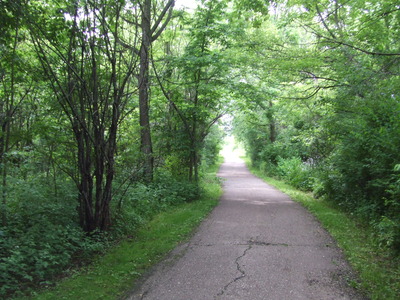 This was across town, very near to where Robb used to live.  This was the path on which we decided we really wanted a cat after meeting His Royal Highness, Sir Iok Sllod Oog Oog Murphy Pickles Gunther Chuzzlewitt III.  He was a friendly stray cat.

From there I rode on across a bridge that was ALMOST under water. 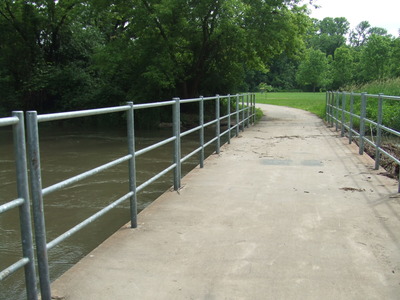 I may not look like it, but that water is up to the edge of the bridge.  See?

Now it wont' let me upload more photos...what the hell?  Fine.  I had a photo of all this detritus from trees and junk backed up against the bridge, but you'll just have to trust me that you can see it on the right side of thatl ast photo...all that brown crap has water flowing under it.  Blah.

Moving on.  I rode on over to campus, where there are usually a lot of college guys running and biking and doing whatever they do in various stages of undress...but school is out.  So all I saw were Asians feeding the geese and some hippy guy smokingo n a bridge.  But I headed over to the beautiful old neighborhood behind the school and took some photos I've always wanted to take. 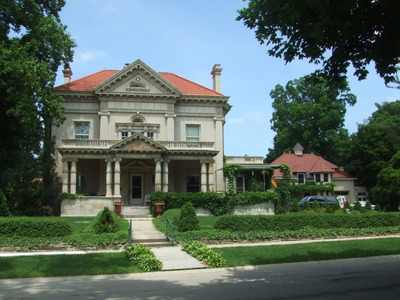 This house is one of my personal favorites.  It's the porch that does it for me.  See? 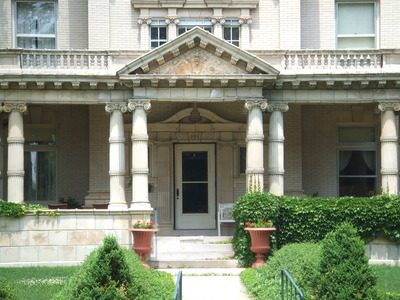 Xanga must have known this, because they uploaded this one three times.  Stupids.

And this is a house I hadn't actually noticed before, but I kind of liked the random green part on the front of it. 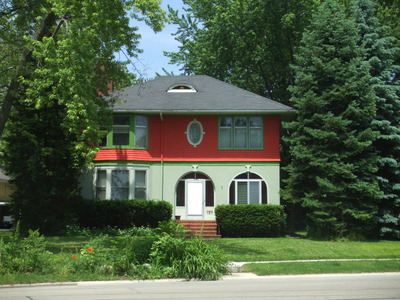 It's cute, except for the metal shutters on the front door...eww.  And then I rode across town, passed by where the Water Guy works (I had no idea it was three blocks from where I work), and headed home.  When I got home, I didn't really feel like I was done, so I decided to ride down the street to the little park where people play baseball on one of their two-ish diamonds.  I never see anyone there, but Robb claims it's almost always full when he comes home.

I took no photos of it, but I did snap this: 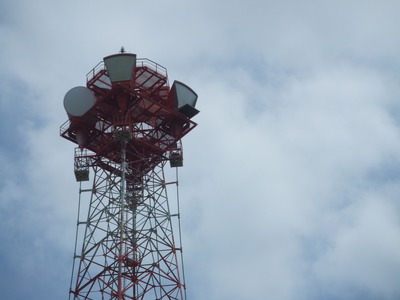 That's the top of the tower that protrudes from teh ground next to an AT&T building near our house.  I have no idea what it's for, but it's always been significant in my life.  When I was little, I always looked for it from the car.  It's how I knew we were almost to DeKalb.  And now I live right down the street from it.

Funny how life takes you places you'd never think.  Anywho, then I rode as fast as I could home.  It felt good to get out and get to know my neighborhood a little better.  I'd love to go again today, but I think it's going to rain and be nasty out all day.  Blah.

Posted by Viewtiful_Justin at 5:27 PM

It's a microwave cell phone tower. If it has been there your entire life... youse a youngin'. (Actually I know how old you are. I am amazed that cell towers have been around that long!) I'm so old... I remember that new-fangled thing the telegraph... OK. I'm not THAT old but I do remember when cell phones weighed two pounds, you had to hold them with both hands and it was $7 a minute in 1980's dollars.

I love the porch on that house too. And the balcony above it! Where you live looks so pretty. You're in Illinois right?

Yup. Northern IL. Site of Northern Illinois University. Some of it is lovely. I just don't take photos of the ugly stuff. :-P

...and you said you only had cornfields! Especially your first photo is lovely. I can just imagine walkin or cycling on that path through the trees on a hot summers day. I also love the old houses, that is something we do not have where I live... just a lot of modern cluster housing complexes.

Nice area Dekalb is. You should see the ghetto where I live in New Jersey. You'd be appalled

My friends live in the "cute" house with the metal shutters.