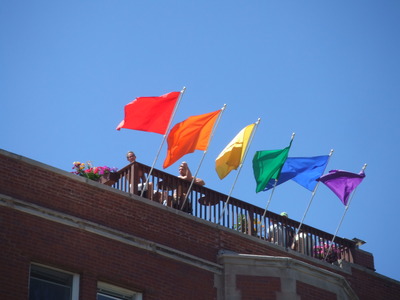 It was a gorgeous day in Chicago on Sunday, which was a nice change from last year's rain.  Unfortunately for Robb and I... 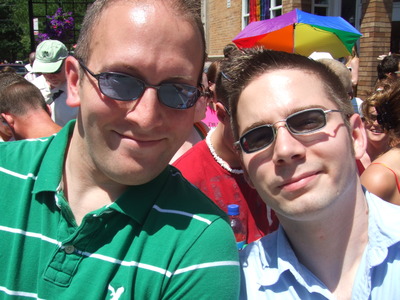 ...our view for most of the day looked like this: 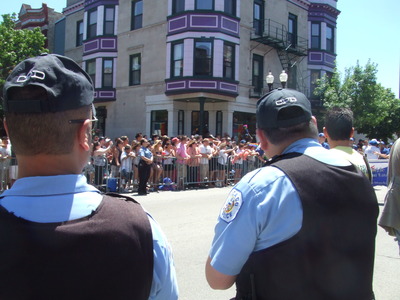 Apparently we picked the one spot to set up shop that the cops AND photographers would be standing in front of.  So...all of my pictures were pretty lackluster.  Someone is always in the foreground, whether that be the cute, chain-smoking security guard, the big, fat photographer, or one of three cops.  My apologies in advance.

I'm mostly going to let the photos do the talking.  Like this one: 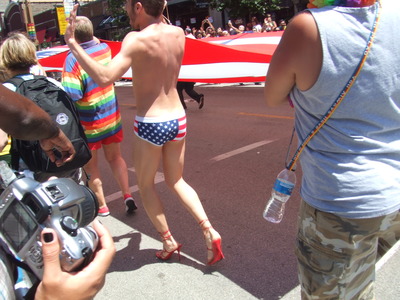 I bonded with the lesbians next to us over that guy's shoes.  We were fast friends. 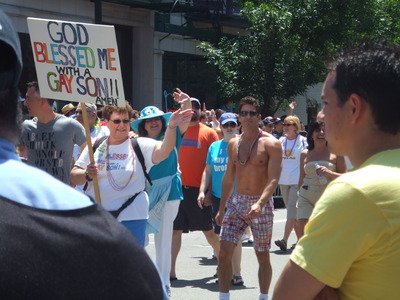 This woman was in the parade again, with her gay son (left) and his hot-as-hell partner (right).

This one is for my friend Jhonna: 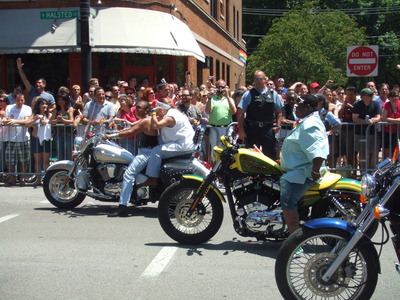 It has always been her favorite part of the parade, and she was supposed to bei n town to come with us, but, like everyone else, she kind of crapped out on plans.  Poo. 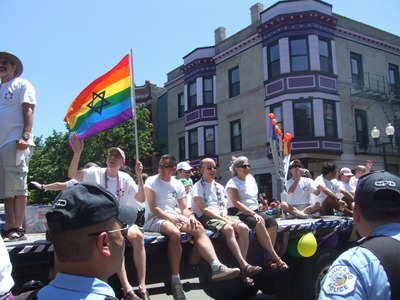 The gay Jews were there, people close to my own heart.

There was plenty of color and sun all the way through. 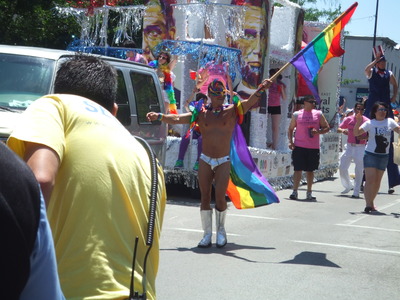 The people in the surrounding apartments had the best views: This woman was in the parade again, too.  I recognized her as the prettiest girl in the whole parade last year.  She was my favorite.  And she looked no worse off this year! 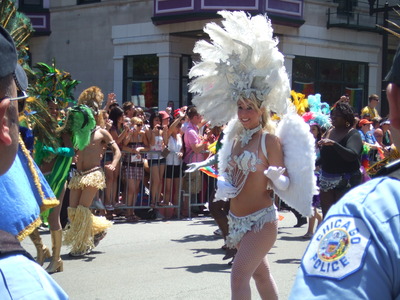 My computer is telling me my links are broken...and this is after an hour of fighting with the damn photo uploader.  I can tell this is going to be a headache already.  Grr.  [FIXED IT!]

Let's move on, and I'll try to come back and fix these later.

Robert Jeffrey had a superhero themed float this year. 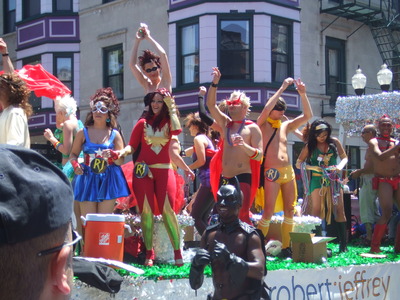 And they were followed somewhat later by the hot gay cowboys, who, last year, were dancing.  This year, not so much. 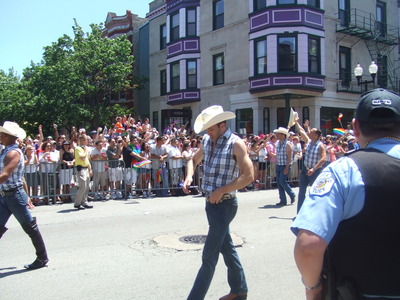 Still hot, though.  Just like Ketty and her Latin Revue! 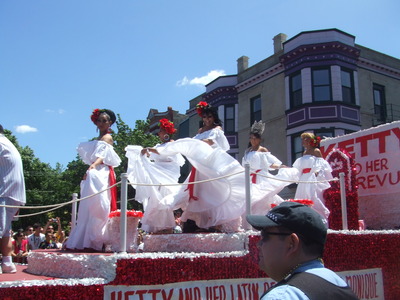 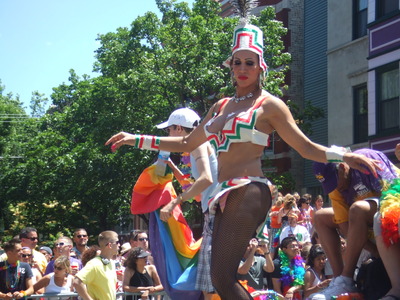 And what chicago gay event would be complete without the drag queen best known to everyone in the area, the one who called me "Pineapple" on Halloween, before we knew who she was: 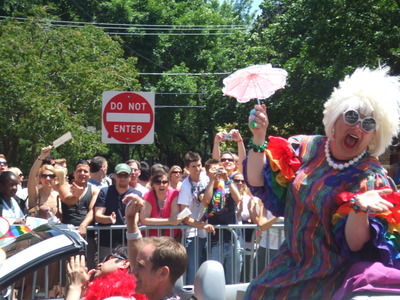 And she's WAY less creepy than this: 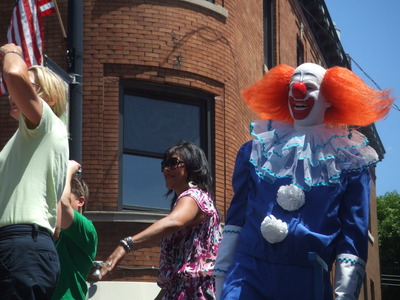 Yup.  It's Bozo the Clown on the Channel 7 (9?) float.  I put him up on my Chicago Pride blog last year and got so many random hits from it.  I still think he's kinda creepy.

If I could get my video to upload, you'd be watching the R. O. T. C. twirl through right here.  It's no secret that these boys have a spot in my heart. 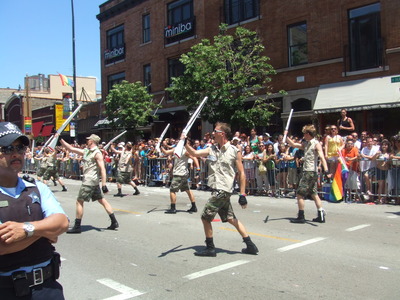 Mmm.  They're wonderful, hot, and fun!

Speaking of hot...there were a lot of politicians in this year's parade, but not one was hotter than Alexi Giannoulias. 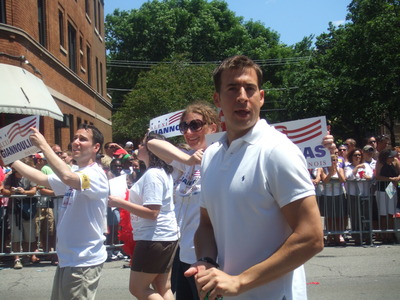 He can run my government any day of the week!

Things continued in a fairly political vein for al ittle bit, including this: 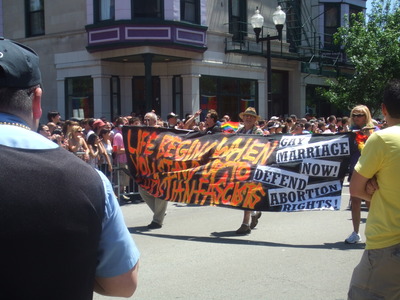 It says, "Life begins when you stand up to Christian Fascists."  The group marching with them was chanting some fairly hateful stuff, and I thought it was really lame that they were fighting hate with hate. 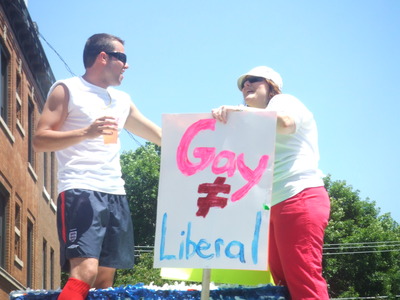 Another interesting point of view.

And then things got back into the physical realm, which, I'd like to say, wasn't NEARLY as impressive as it was in former years.  This was the fourth parade I'd been to, and this was teh least impressive of all of them, honestly.  The floats were smaller and the guys were less hot.  I'm sure the economy has something to do with all of that. 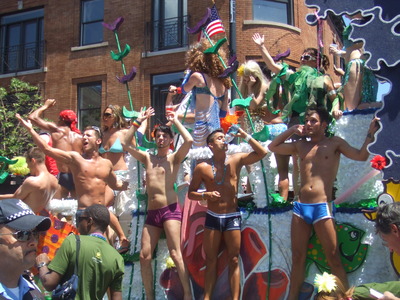 ...might be the hottest one in the parade.  Hydrate always has good floats, though.  All the bars in the area usually do. I thought the guy in the glasses was a nice touch.  I love a man in glasses.

Another bar float, and the one that I think was the most creative: Crobar.  If you look closely, you'll see a man riding a GIANT popsicle on top of that ice cream truck.  It was clever...the logo and all.

Someone else who always has a hot float: Miller Lite!  It seems when alcohol is involved, they go all out for the parade.  Apparently the gays love their drinks.  Meh.  I just love me some hot sailors. This woman had her boobs hanging out, and the lesbians next to me were hooting and hollering.  She was dancing and shaking her bare breasts...which wasn't the shocking part.

The shocking part was when she dropped her drawers to reveal a penis.  Qua?! 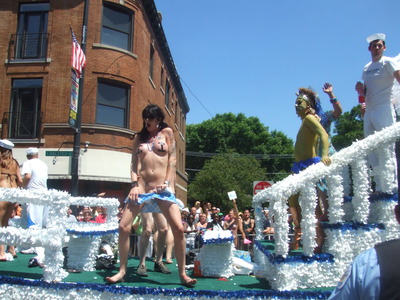 [slightly before the big reveal]

Instantly the girls were silent, along with most of the rest of us.  The cops in front of us were trying to figure out what had just happened, and it was hilarious to watch them talk to each other with such funny expressions on their faces.

And then...the parade went on.

About this time, probably due to the horror that it had just witnessed, my camera died.  Luckily, the parade was almost over.  I did get some shots of Southwest Airlines. We're flying with them to San Diego in less than two weeks!  AHHHH!!!  Vacation is so close I can feel it on my skin.

After the parade, we wandered around for a bit, taking in the sights. And then we decided to get back home.  We're not bar people, and we'd had a lot of fun.  Robb's knee was hurting him and we just kind of wanted to get back to see our Marbles Kitty.  He'd been alone since Saturday, when we threw Robb a surprise 30th birthday party (that it's been KILLING ME not to talk about here).

On the way back to the train there was a crowd in the street, and some boys were dancing in a window of an apartment.  But right below them were some real men, just hanging out and showing off. That's for all my bear-loving readers out there.  All two of you?

It was really a great time, overall.  And I got out of there with only a REALLY PAINFUL scalp sunburn.  Dang.  I can't WAIT till that starts peeling.  Flake city.

Anywho, thanks for sticking with me for my Pride '09 blog!  I've got some blogs planned for the future, and I think I'm going to start a Tuesday feature called "Top Five Tuesday."  That might have to wait until after vacation, though.

Posted by Viewtiful_Justin at 2:41 PM

Great post Justin! Thanks for the tour!
New York City did not hold a Gay Pride Parade but rather a March for Equality and for our rights as human beings and American citizens this year, it being the 40th anniversary of Stonewall.
I did a post about it on my blog the other day.
http://graygaythoughts.blogspot.com/2009/06/images-of-new-york-pride-200940-years.html

Thanks for sharing this. I enjoyed the pics and commentary. My home city doesn't have a Pride but the biggest city in our region (Birmingham) does. Mind you, the weather over here tends to preclude most of the near-nakedness so I guess our Prides aren't such a visual feast as yours (but I could be wrong).

Greetings, I'm just a blog wanderer who was interested in reading your post. I enjoyed the images, and descriptions, and am glad you chose to share this with us. (I especially liked the cowboy.)

@ Stan - Thanks! I'll have to check out your blog when I have some time away from work.

@ Argent - I love sharing my photos! Thanks for the love. And yeah...I was kind of shocked about the whole penis thing...


Good write-up. I definitely love this site. Keep it up