We arose the next day, again at dawn. 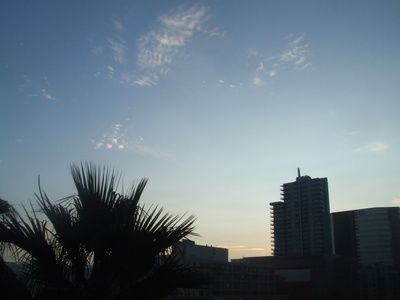 And I was okay with that, seeing as how it was San Diego, the most beautiful place I'd ever been.  That night we'd slept with the sliding glass door open.  The temperature got down around the low 60s at night--perfect for sleeping.

By the time we took the shuttle from the hotel to the zoo, it was close to 75 again.  It looked to be another perfect day in paradise. 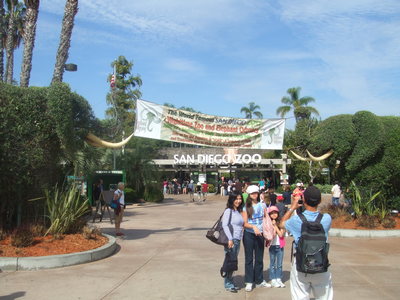 That's the last of the morning clouds burning off as the sun rose over the San Diego Zoo.

The first thing we did was take the bus tour around the park.  We figured that since it was included in our ticket, we might as well take advantage of it.  And what better time than before you've been anywhere else.  It was a good choice, because the zoo is huge!  We were able to figure out what we wanted to see before we were lost in the jungles of Asia or the deserts of Africa.

The tour guide said it would be smart to see the pandas first, since the line to see them just got longer all day.  So... 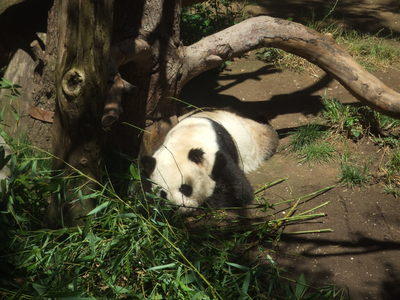 We did.  They were sleeping, and we were asked to be very quiet.  Pampered little guys!  As I understand it, the San Diego Zoo is one of two laces in the U.S. where you can see pandas, the other one being Washington D.C.

From there, I had to see my favorite animal. 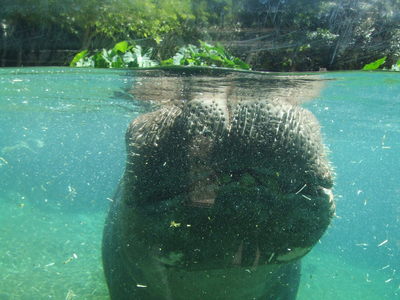 Ever had a hippo look you square in the face?  I have!  Look at those teeth! 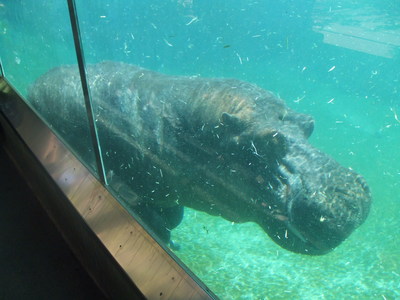 He was so freaking adorable!  Oh my gosh.  I could have gone home then and felt that our trip to the zoo AND our vacation was justified.  You should have seen my face...pure joy.

From there is was sort of a whirlwind tour of the zoo...our shuttle was to come at 7:00, so we had all day!  We saw almost everything, but the rest of these were the ones that I found really interesting. 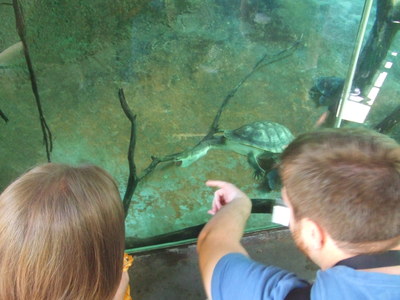 That would be a snake turtle.  It was CREEEPY!  It looked to be yawning when I took that photo.

We went by the flamingos... 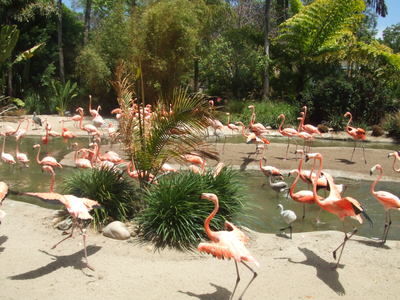 ...where they were busy freaking out about nothing in particular.  Noisy birds!

The reptile house was pretty neat, but it was so dark that this photo is the best one I got: 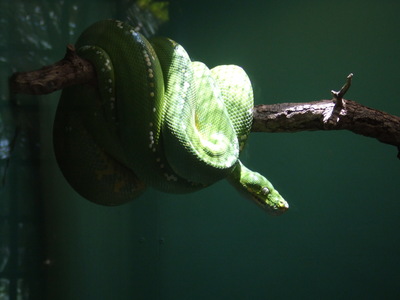 My favorite snake, too.

One of the most surprising things I saw were the Galapagos Tortoises: 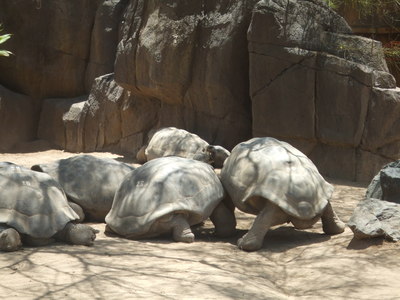 These two are fighting.  When the one who is standing in this photo flopped back down, a huge cloud of dust blew out from it.  These things were HUGE!  Seriously.  I didn't know they came this big.  Picture a full grown pig.  Or maybe a St. Bernard...they were about that big.  Crazy heavy, I'm sure.

Speaking of pigs, next up was the biggest ham at the zoo: 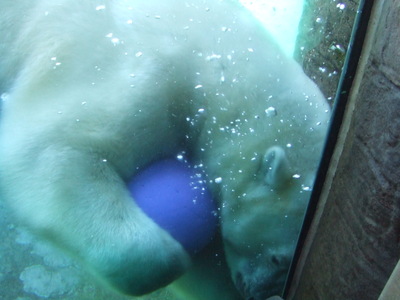 The polar bear!  There were several in the enclosure, one of which was eating carrots by the barrel full.  This guy, however, was playing with his ball and entertaining the crowd.  At one point, he knocked his ball and it rolled away.  The whole crowd goes, "Awww...." and he looks at them sadly like, "It got away!" and then went after it. 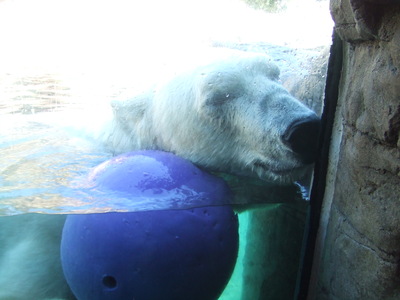 There's a happy face.  Robb got a photo of him chewing on the wall.  What an oddball...

We moved on to see the elephants: 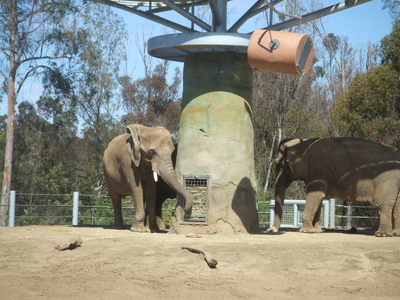 And these little guys:

Industrious little dung beetles, pushing this relatively huge ball of elephant crap around.  They were kind of cute...

After seeing this next exhibit, I came to a conclusion:  Giraffes are funny.  See for yourself. 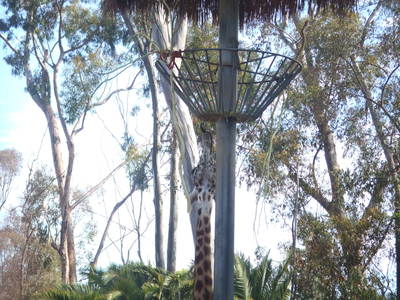 Enlarge this one, and you'll see what I mean.  Black tongue and all.

This one was eating awkwardly. 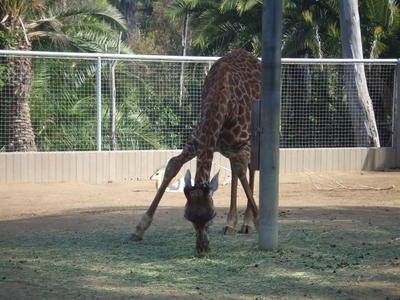 And these next two...well...there must be a reason they looked all alone...remember that girl from grade school who would peel the paint or stucco off the wall and eat it?  Yeah... 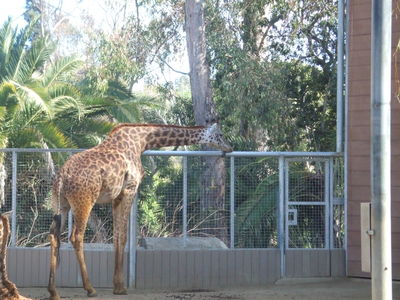 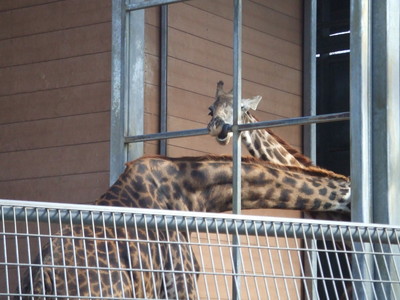 And trying to chew his way out?  Hysterical!  Giraffes...definitely hilarious.

We made our way over to their extensive koala exhibit to find: 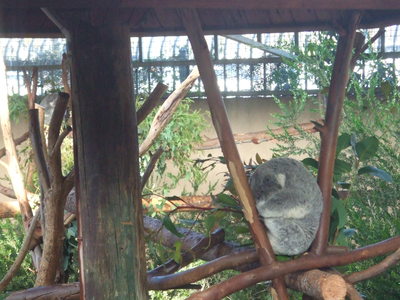 Everyone was wedged into trees and sleeping.  They look so soft and cuddly...but I hear they're really nasty.

Well, Robb and I found what we liked second best at the zoo: 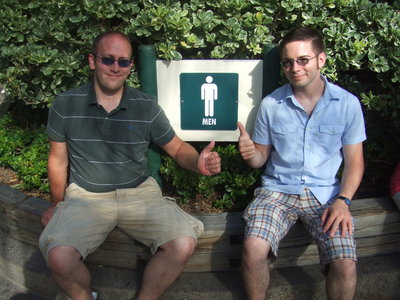 This orangutan was so chill.  Just sitting by the glass and watching a little girl mimic her.  Very cool!

We rejoined our friends, since they had split up when we went to find the monkeys.  And where did we find them?  Right where we expected: 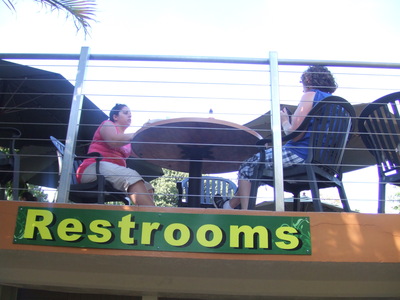 After taking a few rides on the sky tram, we headed home.  I took one last photo before we skedaddled. 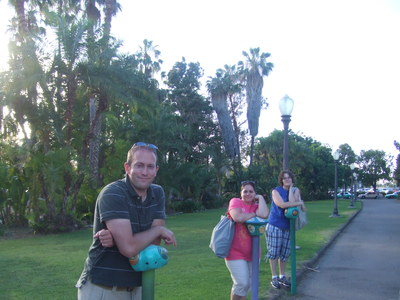 It was definitely a fun time at the zoo with some of my best friends.

And...we made it home just in time to see the sun set from the glass elevator of our hotel. Another beautiful day on the bay.

Posted by Viewtiful_Justin at 3:50 PM

I don't particularly like zoos. But the San Diego zoo is awesome.

San Diego is one of my favorite places. You can't go wrong vacationing there.

Your photos are lovely. I saw some pandas in Beijing zoo and they kept turning their backs to us. Shy beasts. Thanks for taking us on vacation with you.