It was Monday.  Another beautiful day on the bay, as I was fond of saying every morning.  While everyone was headed off to work that morning, I took joy in knowing I wouldn't have to go back to work for at least another week and two days.  The feeling of vacation freedom was really setting in...especially since Robb's first day of the conference was today.

That left Amy, Erin, and I to wander the area Robbless...

We set out under full California sunshine in search of a bus stop that would take us to our agreed upon destination for the day. 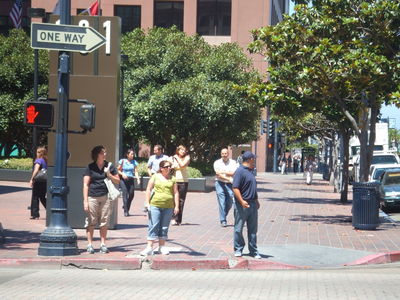 We found the wrong bus stop, thanks to the ladies at the visitor's center, but the bus driver was nice enough to take us one stop down for free so we could catch the right bus.  That would have NEVER happened in Chicago.  Yet another thing that made me want to stay forever. 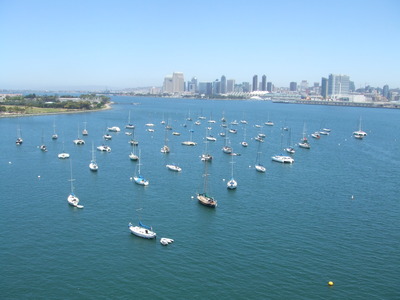 Can anyone tell me where we are?

Maybe this graffiti will help: 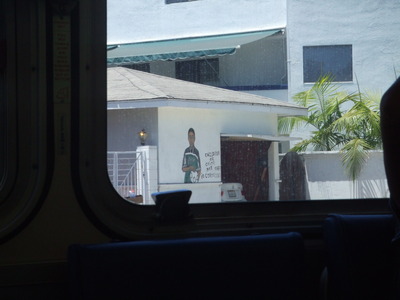 It says, "Children of color not safe in Coronado."  That was...off-putting.  I thought Coronado was supposed to be all glitz and glamour and military boys...but this?  Hm... 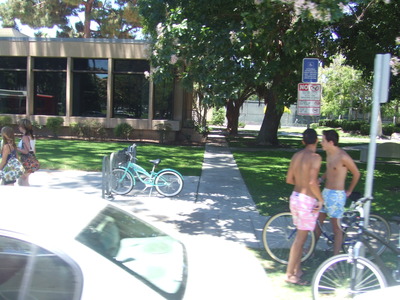 There's more of what I was expecting!  Apparently we just had to get further inland...it still made me wonder about the backstory on that graffiti.

Everything about the island was ritzy.  Even the bank! 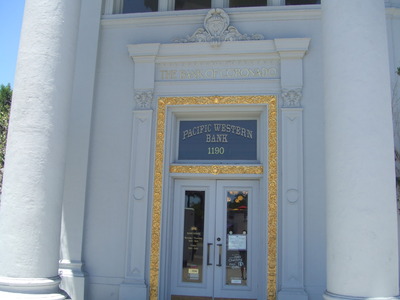 And can't you just imagine Wally and The Beav strolling on down the street as June kisses Ward goodbye and waves to her family from the doorstep? 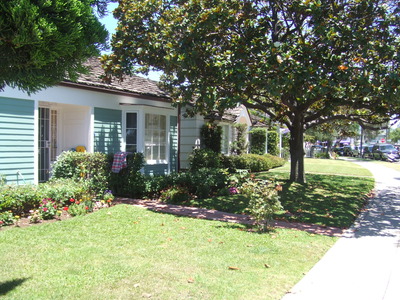 It was a little like stepping back in time.  I almost forgot where I was until I saw this: 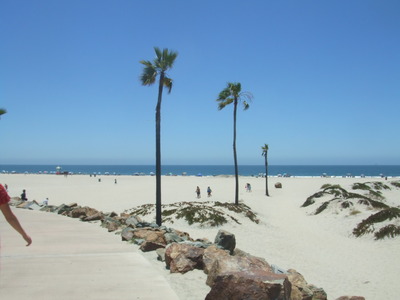 The beach at the Hotel del Coronado literally took my breath away.  I stood there for a good thirty seconds just agape...so beautiful--this photo could never do it justice.

It became my new life's goal to stay here once in my lifetime...perhaps in a private villa with a personal pool? 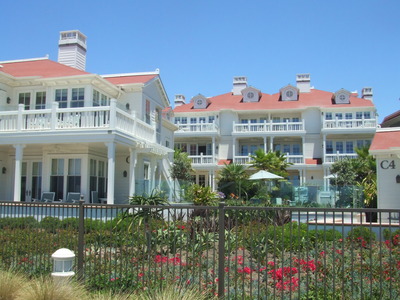 Or maybe in the hotel itself, a famous landmark where every president since it was built has stayed. 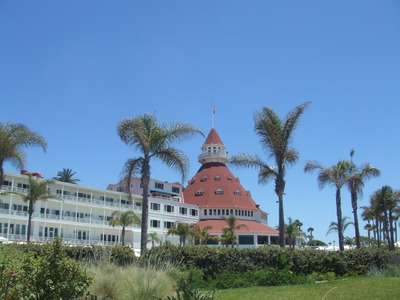 You may recognize it from Travel Channel specials about haunted places...or maybe from Some Like It Hot, voted one of the funniest movies ever made, and starring Marilyn Monroe.  Either way, I know I'll never be able to afford a room there... 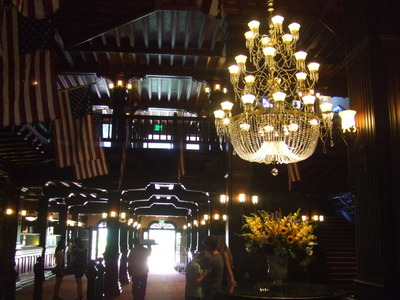 I mean, look at the lobby!  Again...shorts and t-shirt made me feel out of place for a bit, but then I realized I looked about fifty times better than some of the people in there.  Like a reader said, you're never out of place in San Diego in a t-shirt and sandals.  I was coming to find that out.

We explored the hotel a bit, entering a beautiful courtyard by accident: 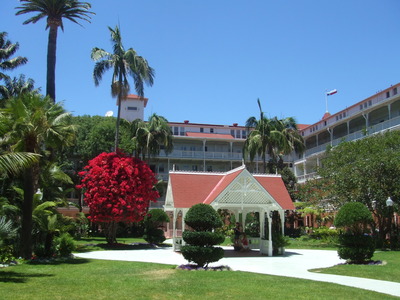 We headed to the front of the hotel, where no one looked at us like we didn't belong, not even when I posed with the sign. 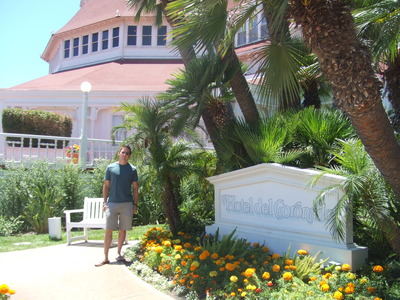 And while we were making our way around to the beach in back again, I started hearing this really loud noise coming from the sky, so, I looked up.  Every second I expected a low-flying plane to cruise by, and yet the noise kept getting louder and louder.  Finally... 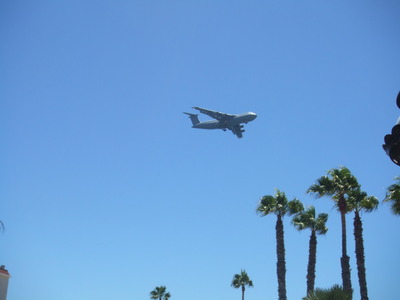 That would be a plane we got the pleasure of seeing take off during yesterday's bay tour.  They told us it was the second largest plane the U.S. builds, second only to Air Force One.  And here it was again, going in to land.  So loud!

When it had passed, our eyes fell to the beautiful hotel again. 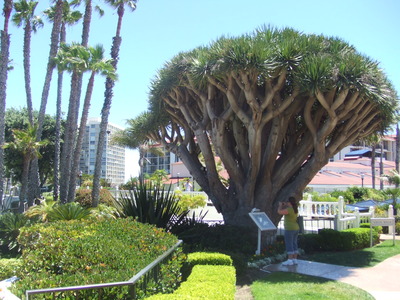 Apparently this tree is one of the only of its kind in the states.  It's a dragon tree...I think...and it was used as a backdrop in the same Marilyn Monroe flick.  I remember seeing it then.

But that was nothing compared to the beach... 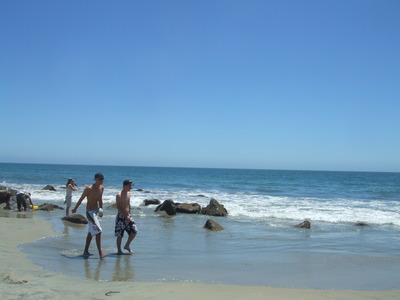 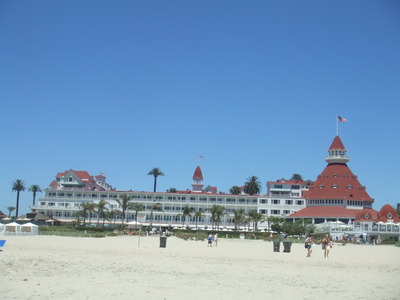 I could have stayed there forever...luckily, although I didn't know it then, I'd be revisiting this beach later in our trip.

It was ta ta to Coronado, though, as we decided we were all really worn out and wanted to chill at the hotel for a bit.  Constant sightseeing can be tiring! 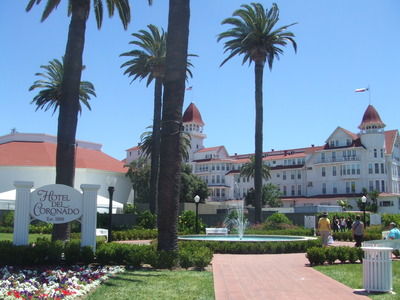 We bid farewell to the hotel, and I said I'd be back some day to stay.

We'd come over on the bus, but we wanted to take the ferry home.  So, we bused it over to the ferry terminal on the other side of the island and stopped for Cold Stone.  YUM!  The cake batter remix is to die for.  You know what's NOT to die for? 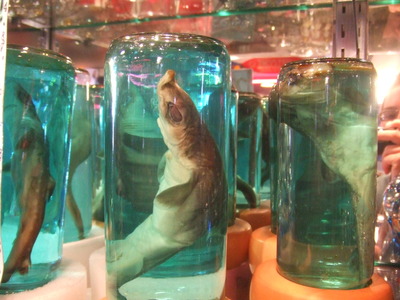 Pickled sharks as souvenirs...eww.  This gift shop had so many odd things in it I could have stayed all day...but the ferry was leaving, so we got on!

We were heading towards the mainland when we turned, and I got a little nervous as we headed for the naval blockade, a floating barrier we would never get through.  And then...I see this: 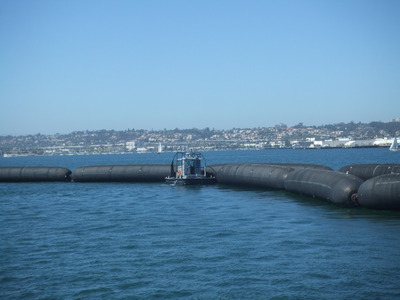 That little Navy tugboat is moving the barrier so we can get in...in the military zone?!  I didn't know what was happening, but I pictured the boat exploding or us being held captive or something...and I only got more nervous when we were told we couldn't take pictures.

So here's what you missed:

A ship with a basketball hoop on the back deck.
An aircraft carrier.
Navy boys.

Really, that's it.  We just picked some people up at a dock in the base and headed back out...it was a quick trip to shore, where they tied the boat up. 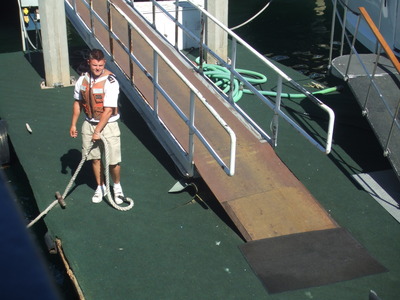 And we disembarked less than a mile from our hotel.  No need to take advantage of this: 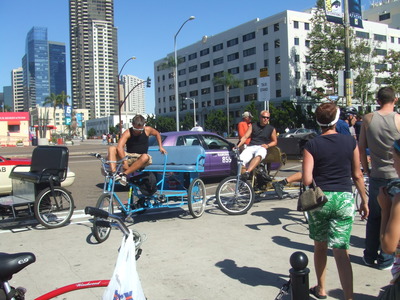 About six o' clock Robb got home from the conference (it was a long day for him), and he and I headed out for In-n-Out Burger.  I couldn't stay in California and not have that!  The girls opted for...something else...saying they could get fast food back at home.  They had no idea what they were missing. 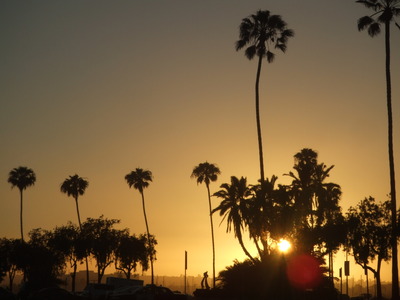 They missed this gorgeous sunset. 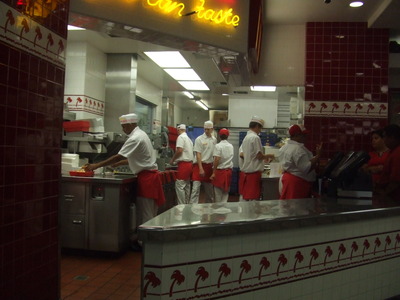 Yum!  What a meal.  What a day!  I'd had enough high-class stuff on Coronado; I needed my roots.  Bring in the fast food.  And the day ended with a smile.

Posted by Viewtiful_Justin at 10:27 AM

those are awesome photos! It looks like you had a good trip! I went to Coronado Island a few years back; my aunt and uncle live in Palm Springs and took us to Coronado for a night. We stayed in that hotel; I completely felt out of place there. I was like, "Where's the ice machine and vending machines?"

Seriously? That's amazing! I'd love to stay there...but I think I'd feel the same way. I'd spend a hundred hours reading in the lobby.

Hi Justin, only one comment for all your holiday posts: EXCELENT! I was not too keen on the Zoo bit as I hate for animals to be enclosed, although I do appreciate the role it plays in conservation and education yet, still... When you(and Robb) come to South Africa to visit (not if, WHEN) it will be such a pleasure to show you hippos, elephant and giraffes in their natural state. Giraffes are so much more than funny, they are the most beautiful, gentle and majestic creatures of the veldt and one of my favourite game species. Your posts about your holiday really make me want to go with you on your next holiday, just think, we can check out the eyecandy together (but please don't tell my kids or grandchild).

Imagine how I felt when I was out there comong back to fucking filthy New Jersey. Talk about a major downer.

Yeah, really, Stan. I can imagine that being worse than coming back to Illinois.

And Human, I know giraffes are majestic and amazing. I really love them, honestly, as funny looking as they are.

And I'd LOVE to visit you and see hippos in their natural habitat.