We left on the 9th of July at asscrack o'clock in the morning.  I'm sure some of you have been up then, before cabbies are rude but after the whores go to bed.  You know.  Robb's dad drove us in, with a gassy dog in the back seat.  That will leave a guy wishing he'd been born without a sense of smell.

Midway airport is very forgiving when it comes to early morning travel, meaning that we got through security and to our gate with no trouble at all, despite running on four hours of sleep.

There we were, fueling up and getting the bags on.  It was only two hours until we left this terra firma for a loftier setting, if only for four hours.  We boarded our plane, said a quick prayer, and hit the skies.

My mental inventory of the moral sum of the plane's inhabitants came back a little disheartening, so I just settled back to watch the ground fall away and took comfort in the fact that there was not a dang thing I could do about it now.

Before long, we were here: 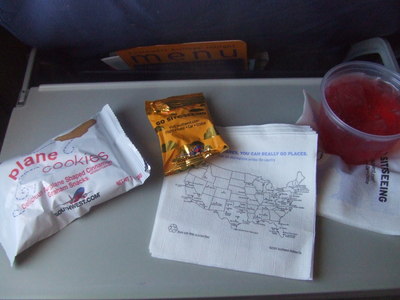 That would be plane cookies (like a teddy graham), honey roasted peanuts, and cran-apple juice.  Robb flirted up the gay flight attendant a little, and he gave me the whole can.  He also gave us wings, luggage tags, and a deck of cards.  We always luck out on flights.

We started coming down to our layover:

Denver, where we didn't even have to get out of the plane.

After picking up others and saying another little prayer that our luggage was still onboard, we took to the skies like a bird in flight (and if you can name that song, I'll sweep your chimney)! 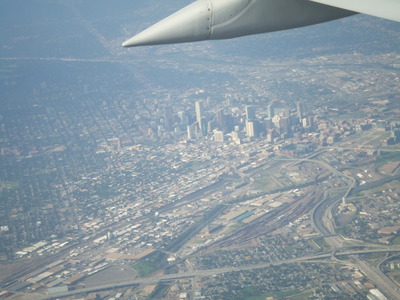 And onwards to San Diego!

A brief hour and a half later, I took my first photo of our new home for the next two weeks:

The hotel sent us a shuttle, and after checking in at the Holiday Inn on the Bay and dumping our bags (yes, they made it), we set out to get our bearings before our friends' flight arrived.

The locals were shutter worthy, as you'll come to see in the next few posts:

I hope whomever the flowers were for loved getting them as much as I loved seeing her scuttle across the street with them.

We took a brief walk around, saw some buildings, trees, people, etc.  And after a harrowing trip to find a Rubio's (fish tacos are the best thing ever!) and having no luck, we settled on somewhere else.   Aftewards we had an hour or so to kill, so we strolled the bay, where the pedicab drivers are FINE.  Seriously...hot foreign boys all offering rides.  There was one in particular who rode by, asked if we needed a ride, and smiled at me like whoa.  I said no.  He rode his tiny, tan, gorgeous, Italian self away and then turned around and came back.  "You sure you don't need a ride?"  I pointed to our hotel across the street.  "We are only going there.  We don't need a ride."
"I take you for free."
I looked at Robb.  Was this the beginning of a porno?  Was I being punked?  I turned him down again and said I needed the exercise.
He doesn't miss a beat and says, "No!  You don't need exercise."  He looks me up and down.  And then he looks at Robb.  "He needs exercise, but you?  No!"

And with that, I told him no and walked away.  No one calls my boyfriend fat and gives ME a ride.

Robb was a good sport, and we headed back to the hotel for a bit before wetook the shuttle back to the airport to find our friends.

Waiting at the airport...seeing the sights.  I love checking out the way people dress for a flight.  Some of them are in dresses and slacks, nice shirts, etc.  Others?  Sweat pants and ratty tees, old shorts, beer t shirts, etc.  My mom dresses up.  I just like to look cute...it apparently gets us refreshments and playing cards.  This woman's dress was gorgeous.

And so, our friends arrived and we snuck them in to our hotel room...SHHHHH!  And then it was off to see the night life in the Gaslamp District.

I was a little underwhelmed by the whole thing, honestly.  Maybe we needed a guide...and a few extra hundred dollars.  But it was pretty!

We were all pretty beat, and we wanted to get some sleep for the zoo in the morning, so it was back to the room.

I could barely believe I was living in paradise...and we still had 11 more days!

Posted by Viewtiful_Justin at 2:16 PM

What? No photo of your tiny, tan, gorgeous, American self and Rob? Lol. Glad you enjoyed your holiday so much and can't wait to hear the next episode. Write soon.

I remember the first time I arrived in San Diego via San Francisco years ago and vowing I would someday return to live there.
Needless to say I'm now back in New Jersey. UGH!