We planned ahead.  We really did.  We thought, "Let's get up early, walk to the closest train, and then get off and get the rental car company to pick us up.  Then we'll drive to Hillcrest and see the Pride parade.  We may eve be there early!"

Well, as they say, the best laid plans...you know. 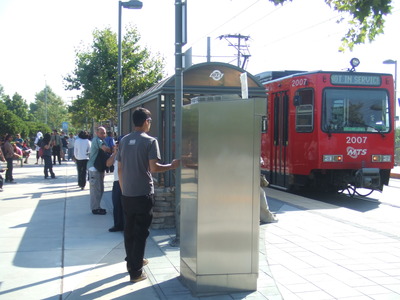 This is where we went wrong.  We were jinxed the moment Robb said something about how these trains were nothing like Chicago's CTA, how San Diego's public transportation is so clean and reliable and perfect, instead of the delays and craziness of Chicago's.

Well, someone with a sense of humor was listening.

"I'm sorry.  This train is out of service.  This train has gone into total electrical failure."  So we got off...and it was smoking.  SMOKING!  So...we waited...

And then we had a snafu with the car company.

This was the first thing we saw, and I knew we were home: 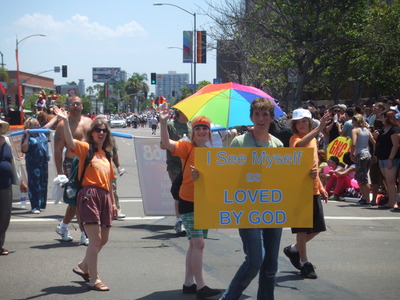 I could talk for hours about how San Diego pride is all about advocacy and people showing support, and how it's so much better than Chicago's because it's not about getting plastered and making a scene.  But I know you guys just want to see the photos, so... 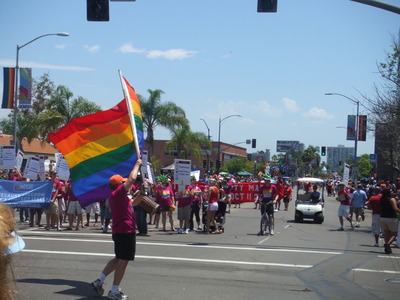 And...this was an odd entry: 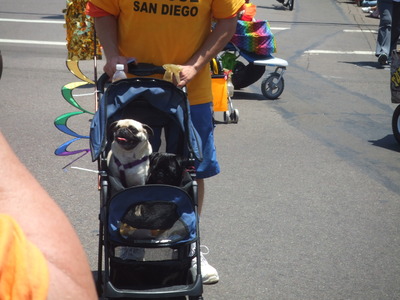 There was a Rocky Horror float: 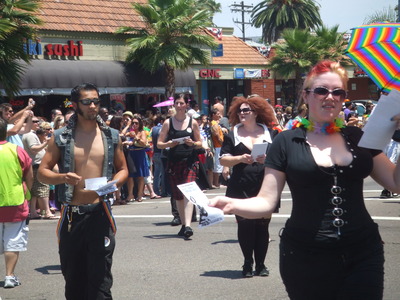 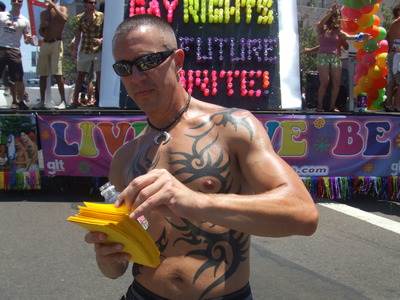 He singled me out in the crowd...wild!

This blanket apology from the church as a whole made me smile. 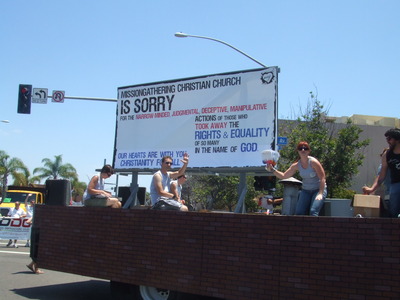 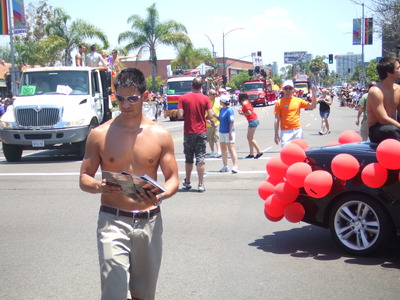 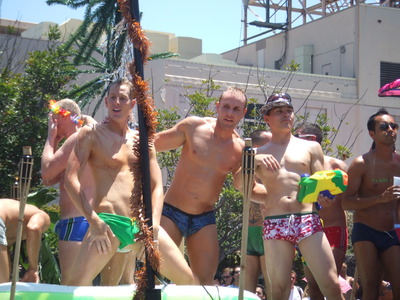 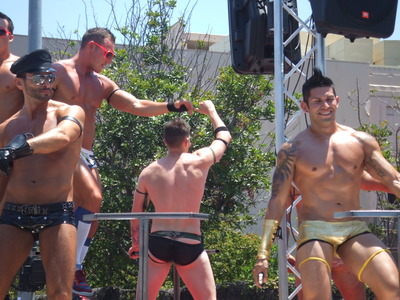 Yeah...we apparently showed up at the tame part and then it got a little wild.  No complaints here, though.

I thought this float was the coolest in the parade: 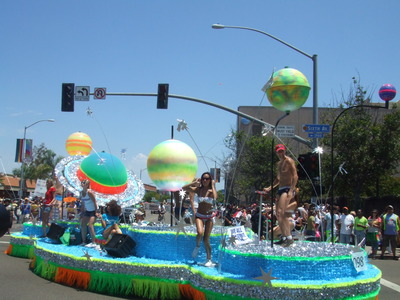 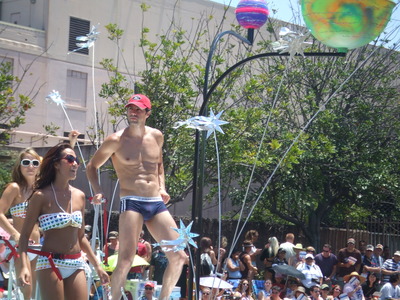 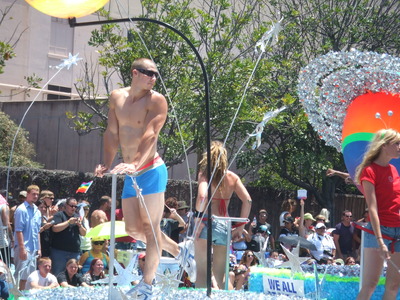 Funny story behind this next photo--the guy with the sign had stopped me two days earlier while I was wandering the city streets and asked me to join Greenpeace and save the whales.  He was cute AND I do care for my planet, so I listened.  But I didn't have any extra cash to pledge...seeing as how I work part time and that seems to be less and less all the time...but the whole time he was talking to me he was really nice until I mentioned my boyfriend.  I thought maybe he was phobic...but I guess not! 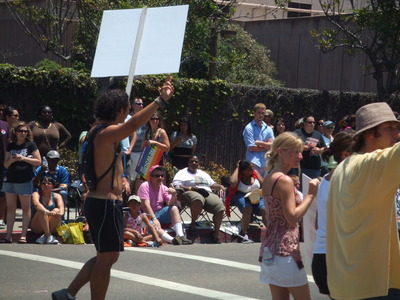 Small world...he even waved at me with a look of recognition in his face.  That's so funny to me...

They waved, but there was no recognition in their faces...and there didn't have to be...seeing as how I didn't even realize they HAD faces! 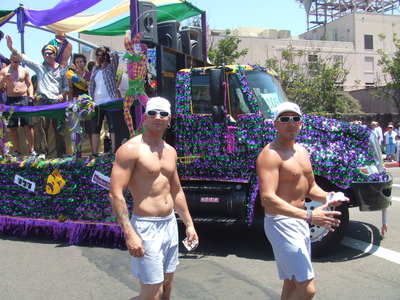 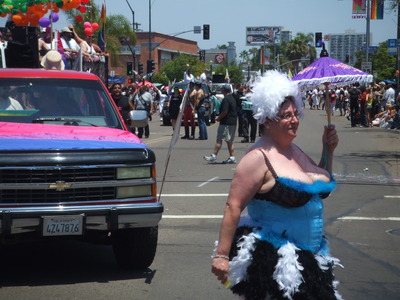 There was plenty of costume and drag and fun stuff like that.  Definitely something for everyone... 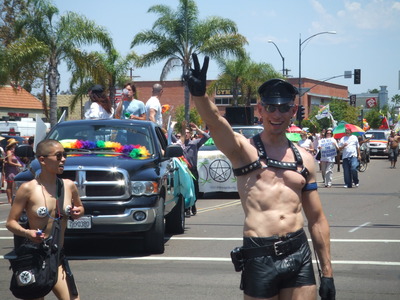 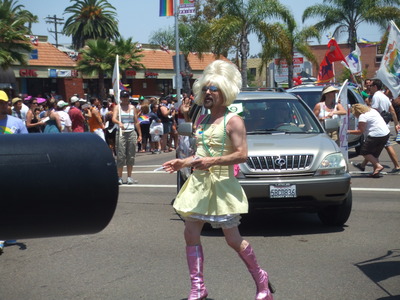 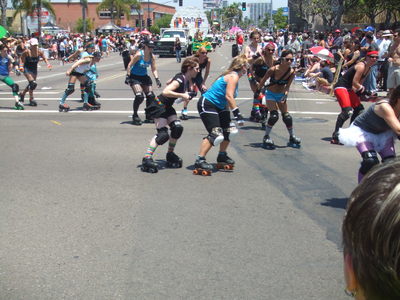 It was all there.  And people were hooting and hollering as those derby dykes lay down and had the other memebers jump over them at high speeds.  Fun stuff!

I loved the people were so unafraid to show affection to eachother and anyone who was looking: 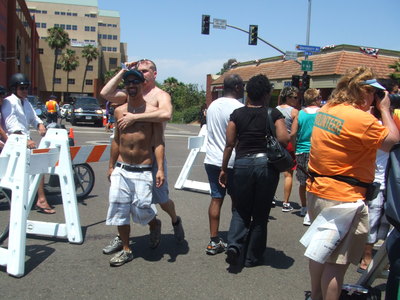 But to take your eyes off the parade for a minute was to miss stuff like this: I suddenly felt the need to have something built for me...

At the end of the parade was this HUGE pride flag... It went on for a mile! And afterwards, guess who was right there to take people wherever they needed to go: Everyone started heading towards Balboa Park for the festival.  So...we followed them. This was absolutely adorable, let me tell you.  The hot gay dads?  Definitely don't see enough of those. 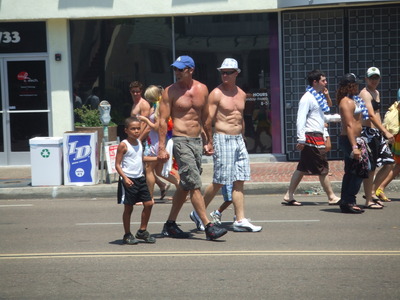 But these guys were just great.

We followed them (not creepily) towards the festival...and it looked like the emergency personnel were ready for a party. But that's for part two...tomorrow.

Posted by Viewtiful_Justin at 12:28 PM

I am so glad you took all these great photos! Makes me feel like I was on vacation with you! :)

:-) That's why I do it. It's nice to see SOMEONE commenting...my blog is like a ghost town recently. I have no idea why...maybe people on blogspot don't like photoblogs...

The people on xanga seem to adore them. Different crowd, I guess.

Ugh! You stopped at the emergency personnel, and I have to wait a WHOLE day for the rest? You're a tease. :(