I woke up with a sore throat and shook my fist at L.A.

Our plane left at four, so we wanted to be at the airport by two.  That meant half a day to kill before we left.  We decided to see the things we wouldn't be able to see at home:  Mission Beach and In-n-Out. 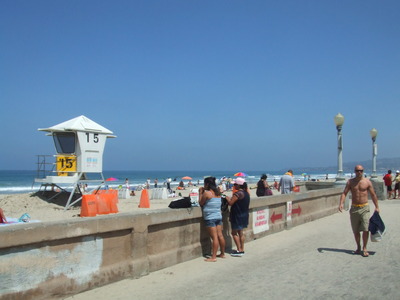 It was a gorgeous day at the beach, busy for what I would have expected on a Tuesday, and warm.  Our luggage was in the car, and our feet were in the sand.

We wandered down past the area where we'd turned around a few nights prior.  There's a point where the beach goes from nice and peaceful to a little bit ghetto at night.  Bit in the day, there were people all over. 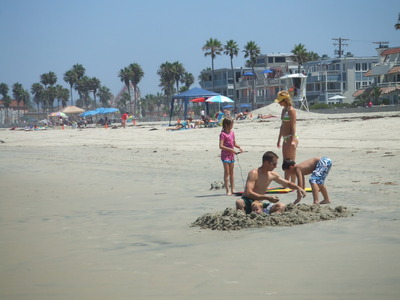 If you look closely at this photo, you can see a little toddler peeking out of that hole that hot dad is digging.

We people watched, tried to stay dry, and took photos. 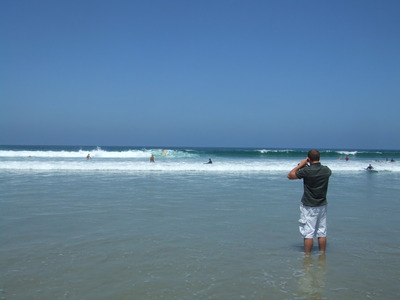 Since it was still kind of early, there were shells people hadn't scooped up yet. 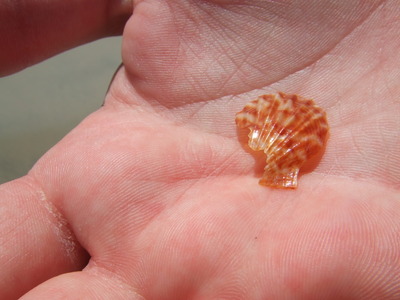 We wandered for a few hours just enjoying the last time we'd be able to wade in the Pacific for a long time.  And when we were sufficiently hungry, it was off for food. 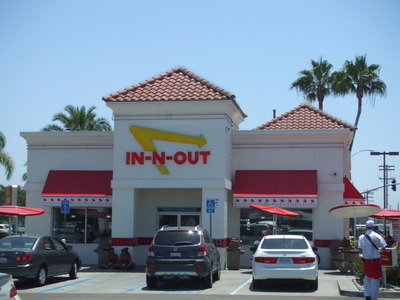 After that, we waited around in the rental car office for a ride to the airport, sharing the tiny space with this guy who had horrible B.O.  It was great.  Finally, we were off, though.

I started feeling like crap about this time...weak and dizzy with a headache.

Security was a breeze, so we ended up having almost two hours to kill.  And what is there to do at an airport?  How about...people watch! 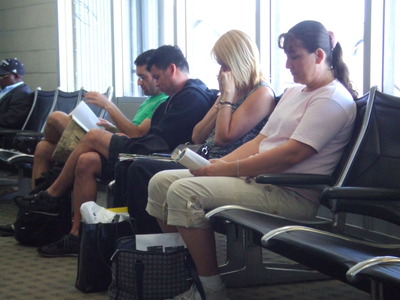 So we did.  Those two guys down the way were making eyes at us at one point.  They were cute.  And a cop kept coming to talk to that woman seated next to them.  Apparently there was some problem he was trying to resolve.  I couldn't really hear, and it was hard to pay attention to words when all I could focus on was how tall, dark, and handsome the cop was.  Wow.

Before long, we boarded, and we were on our way home. 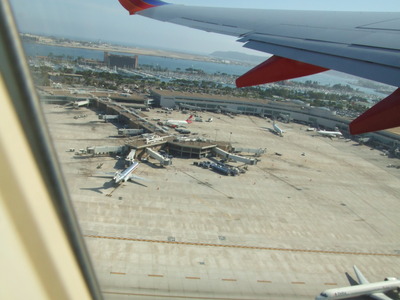 I said a little prayer as we left the ground, and settled into my seat.  By now I was feeling like absolute garbage.  I was so sick, my skin hurt.  No lie.  But I soldiered on taking photos as we left my new favorite place on the globe. 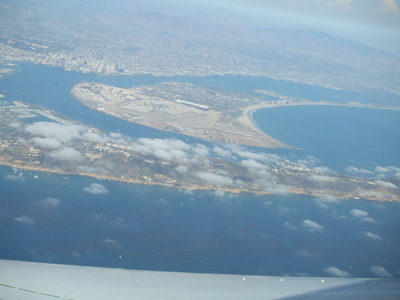 We swept out over the ocean and headed back toward land.

I took one last look at the bay: 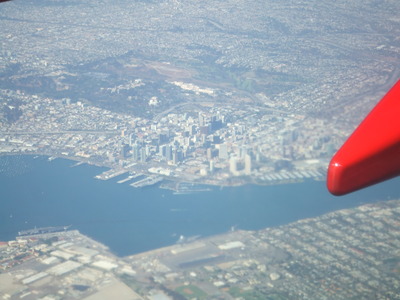 Our original little bayside hotel is right there by the docks...

When we flew over Coronado, the scrubby little hills on one side of the beach finally made sense to me. 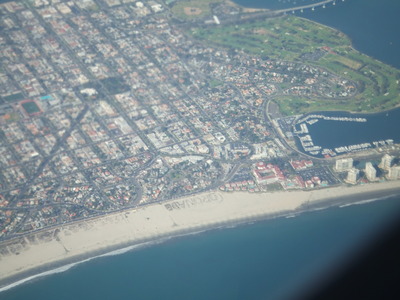 Enlarge this one...you'll see CORONADO on the beach.

I loved this shot of the bay bridge: 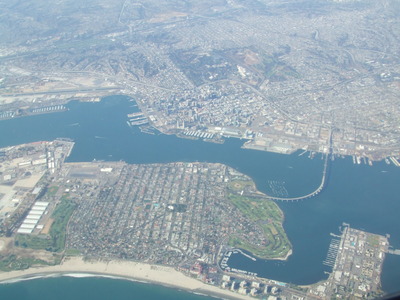 So pretty!  And then it was cornfields and clouds as I tried not to die on the way home. 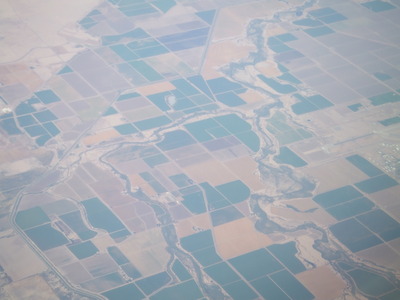 We passed this in the desert: 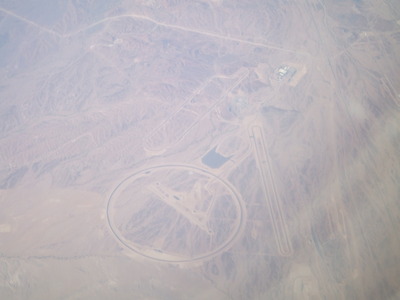 It looks like several tracks designed to test cars...but there were no major roads leading to it at all, just a tiny little building.  I wonder what it was...

I was fading out, and Robb was scoring us extras by flirting with our gay flight attendant...but I managed to get a photo of one last sunset: 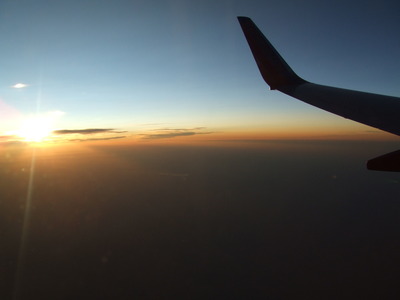 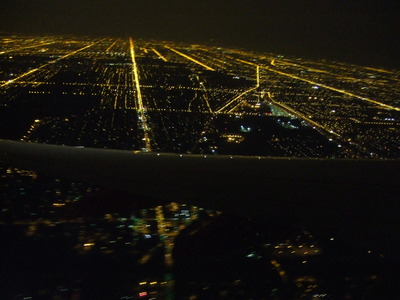 I stumbled along to our bags, ready to just curl up and die.  We rode back to Robb's dad's house to get our car, which wouldn't start.

After that was all cleared up, I slept on the ride home, wishing I could float.  I'm sure I had a fever, and I cursed L.A. the whole way home.

We got to bed finally around 2 AM, and I had to work at 7 the next morning.  Isn't my boss lovely?

Yeah...but I made it.  And I am finally getting over my cough.  After what...three weeks?  A month?

Remind me next time we go to California to stay away from L.A.

Overall, it was a great time.  Thanks for coming with me, everyone!

Posted by Viewtiful_Justin at 2:17 PM

Since I don't have a crystal ball and don't know when you will be going to CA again... here's your warning.

Do you need me to make you a button with that on it for nano this year?

Those are beatiful plane shots! How'd you do that? Mine always come out horribly.

btw, you'll appreciate this: my journal entries (and there are many of them) about a certain guy named paul are coming up in the coming weeks! :)

Exciting! I had such a crush on Paul...I even learned to spell his last name. :-P

Having not had a vacation of any kind this year (or for several years, come to that), I've really enjoyed coming with you on yours. Great photos meshed with pleasing and apposite words. Hope you're feeling better now. Did your kitty get on OK without you?

Great photos. Glad you had In-N-Out, the best cheeseburgers, fries and shakes, ever. I've been eating them for many, many years and still good.
Looks like you had a great vacation.