I feel like I've lost some close friends.  Like I moved away from one of life's most beautiful places, and I can never go back, except to relive the memories.  And that's sad.

Last night Robb and I finished watching Pushing Daisies.  It could be the most beautiful series that has ever been on television.  The music is fun, the colors are vibrant, and all the characters are quirky and amazing.  Unfortunately, the writers' strike ruined what could have been an amazing thing.  And when TV came back, no one wanted anything to do with Daisies.

I love Ned, Chuck, Olive Snook and Emerson Cod.  Love them!  I want to be best friends with all of them.  I want to visit the Aunts' house, meet Pigby, eat at the Pie Hole. 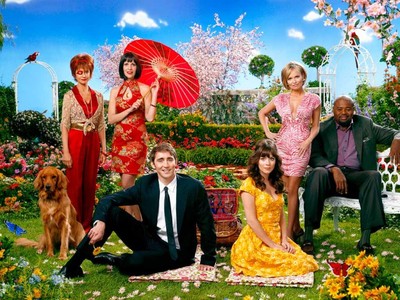 It's a little depressing.  And it's stupid that I feel a sense of loss.  It's TV, for Digby's sake!  But...I let them into my house for an hour every day, and now I think I'm gonna miss them.

I've gotta say, though, that the worst part of it is having loose ends that just will never be resolved.  What happened to Chuck's dad?  How do Lily and Vivian react to the big secret?  To each other?  What about Emerson's daughter?

Ugh.  It kills me to have to move on.  Twenty-two episodes.  Sad.

But there's hope.  I just ordered Wonderfalls on Amazon.  Lee Pace (Ned), who is one of my favorite actors after this show, is in this series, written by Bryan Fuller, as well.


Posted by Viewtiful_Justin at 8:37 AM

You've just pushed me to rent this series ASAP. I'm amazed it's taken me this long to get to it, actually, as I love love love Ellen Greene.

I own these on itunes and need to just buy the dvds. i'm hoping for enlightenment in the extras.

wonderfalls was good, but not as good as daisies.

We loved that series, too, and immediately bought both seasons. ABC did the same thing with Defying Gravity which I loved. I think regular networks are afraid to give anything a real chance.

We loved this show too - so refreshingly different. Did you know that Jim Dale, who did the voice overs used to be a regular in the awfully cheesy and naughty Carry On films, which are a classic of british cinema :-)

Also, they canned Firefly also (not sure why) which was one of the BEST SF things on TV.

Jim Dale also reads Harry Potter on the audio disks, or so the boy says.

Emily, I saw that article! I ate it up like warm apple pie!