Alright, this installment of Top 5 Tuesday comes straight from the roaring 90s!  When all of the rest of you were out getting girlfriends or boyfriends and growing up, I was playing these Top 5 Computer Games You've Never Played.

There was nothing better than the glory days of Sierra's point-and-click adventures (except, of course, our other 4 entries), and this was no exception.  The spooky tone of this game hid some really random humor and may have scared off some younger players.  And while the combat was really wonky, exploring and solving puzzles in this quirky, colorful game was truly satisfying.  I never made it all the way through this one, but if I could find a copy that would run on my PC, I'd give it another shot. 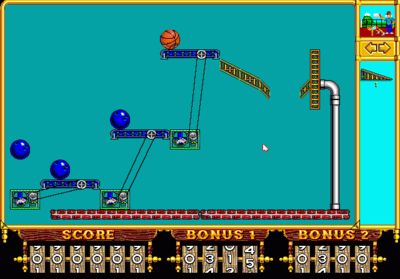 This was another Sierra gem (did anyone else MAKE games back then?) that got too little fanfare.  You were given a goal in each stage, along with a pile of parts you had to assemble to reach that goal, whether that be popping three balloons or shooting a basketball into a hoop.  In the stage from this screen shot, I once successfully stacked two bowling balls on top of each other.  Real physics be damned!  I never did find a full version of this game, but the eight levels from the demo really tickled my brain. 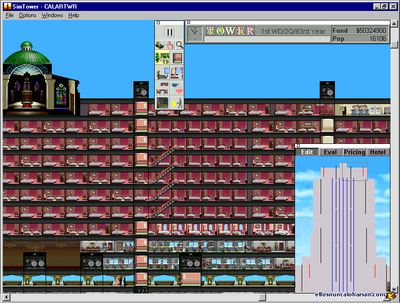 I know.  I know.  Some of you are crying "LAME!" right now.  But really, once you got past the fact that this game wasn't shiny or easy to play, it was a pretty cool game.  I spent hours trying to place condos in order to garner more rent so I could afford to put in more elevators for my ever-annoyed tenants.  And who could ever forget that roach symbol when hotel rooms got dirty?  They spread like...well...roaches.  It may not have been the crown jewel of the Maxis line up (oh, THAT'S who was making games besides Sierra!), but it was a really reat game that no one played. 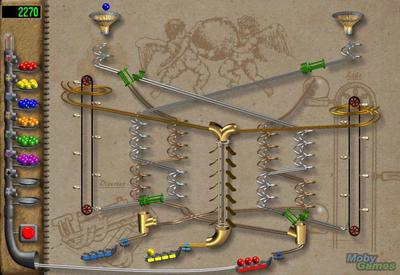 I had one of these sets when I was little, and every time I go home for a holiday, I play with it.  How cool was it, then, when I found this game in a collection of other games I bought on a whim.  It was the marble set you always dreamed of, and you never had to clean it up!  At times I wished I could pick it up, because it was sometimes so frustrating I wanted to hurl it across the room.  But even then, it was pretty fricking phenomenal.  Good learning curve and great challenges nabbed the number two spot on my list!

And now for the number one computer game you've never played: 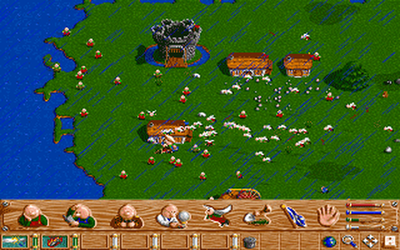 Whoever came up with the idea of pitting different colors of little bald men against each other with traps such as skunks and land mines (my personal favorite combination) needs both detox AND a round of applause!  You took control (literally, with a giant hand) of a tribe of red-garbed bald men, assigning them jobs like builder, military, scientist, etc, and worked to rid the map of whatever other colors were there.  Once your builders had completed a house, you piled your Baldies inside of it and assigned them to rooms (mating by jumping on the bed, researching weapons or new houses and castles, etc.), and then you prayed you'd develop things faster than your enemy so he wouldn't kill all your men.  And with a little help from the F8 key, you spawned a million men and conquered!  It was sick, it was twisted, and you could drop a rabbit in a bear trap.  It was everything I wanted when I was a teenager!  That's why it ends up at number one on my list of the Top 5 Computer Games You've Never Played.

I certainly hope you enjoyed this installment.  And please, if you played it, let me know!  I hate being alone in my bliss!

Posted by Viewtiful_Justin at 10:44 AM

Nothing wrong whatsoever with Sim Tower. Even though I spent the majority of my teen years practising and writing music and stories, I did take breaks to play with this or any of the Myst games.

I simply loved TIM - played it for hours on end at work. At that time I did not own my own computer yet. Have you ever played Indiana Jones and the Infernal Machine? That was my absolute favourite when I bought my first computer in 2000. Even had the theme song as a ringtone on my cellphone.

Never got to play any of those games, although the sicko in me quite likes the sound of the baldies game. I don't generally play games on the computer (I can count less than half a dozen games ever vompleted), maybe becuase I program them and support them for a living. Great post though!

@ Human - YES! I loved that game! It should have made my list! They just released a Wii Indiana Jones game, and as a packaged bonus, you can unlock Infernal Machine to play on the Wii!!! I'm going to buy it when I have some extra cash, just for that.

Neat, and you're right, I never played this. When I was a kid and didn't have a computer I was so all about finishing my work early in school so I could play number munchers and the oregan trail..fucking Loved! the oregan trail! And after that sims stole my heart.