So, Robb and I took a bike ride yesterday around 1 PM.  Why was he home?  Why was I home?  Well, he had a dentist's appointment in the morning and took the whole day off.  I'm just off on Tuesdays every week.  So, we decided to take advantage of it.

Well...during our ride, we had a miscommunication which led to me pulling out in front of him...he slammed on his brakes and ended up coming off the ground a little and then slamming his bike back down.  He never lost control, really, and he didn't fall off.  But he bent the rim of the back wheel.  So...after some apologizing and some ghetto repair, and after a WAY CUTE guy in the maintenance department told us he had no idea where we could find an allen wrench (he didn't look like the type of guy to even know what that was), I decided to go home, get the bike rack and Robb's car, and come rescue him.  So...I did.

The whole time, though, Angry Mr. Sun was a-beain' down on my shoulders.  Which were bare.  I sunscreened my face, but...nothing else.  So.  When I got back to save him, we put the bike rack on the car--a feat in and of itself--and we took the bike to the repair shop.  An hour and $15 later, it was back to good.  Hooray!  We went to get ice cream (kind of makes the bike ride pointless), and we came home.

In the time it took to get the bike fixed, get ice cream, and come home...this appeared: 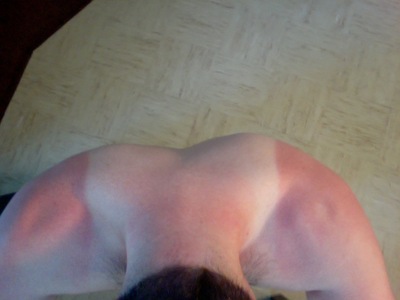 That's not a trick of the light, and yes, I AM holding my laptop over my head to take a photo of my shoulders.  Those red lines?  That would be where my tank top stopped.  Oh yeah...it's way red.  Like...inside of a tomato red.  Sleeping last night was no treat...especially with the thunder that sounded like cars exploding outside the window.  Yikes.

Posted by Viewtiful_Justin at 2:17 PM