A Review: The Witness...

This weekend I had the pleasure of delving into Jonathan Blow's The Witness on PS4 with my friend Jeff.  And my friend Armand.  Who turned out to be the smartest of us, to the shock of all.

For those of you who don't know, The Witness is an environmentally-based puzzle game for multiple platforms.  Each puzzle in the game has you drawing a line through a grid of squares.  That's it.  It sounds simple, but it quickly becomes head-scratchingly baffling.

Sometimes you'll look at a puzzle full of dots and colored squares that look like a foreign language, hopelessly confused.  Then you'll stumble across a simpler version of the puzzle that visually teaches you the rules for solving that type of puzzle.  And when you finally make it through a series of lines through grids, sussing out what their particular solutions are, you'll go back to that original puzzle and realize the solution is easy!  You just didn't have the rules before.

This happens OFTEN.  Sometimes I stared at a puzzle trying to figure out its secret rules, only to determine I must not have the knowledge yet to solve it, and then turn around to see a simpler version posted across a beautifully rendered ruin.  Other times I'd give up on a puzzle I can't figure out, and I never saw another of them in my time.

But the game is GORGEOUS.  It's the prettiest game I've played in a long time. 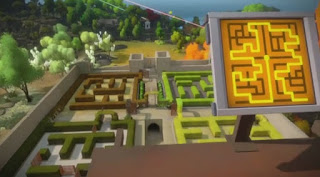 There are blazing orange forests and crystal blue waters, all hiding hidden line puzzles in their nooks and crannies.  And then...the ENVIRONMENTAL PUZZLES.  Oh, man.  This was basically our time playing:  "Wait.  Go back.  I think I saw something."

I was scanning the environment for circles and lines as Jeff ran around the gorgeous island.  In the sand, in the water, in the sky.  We slowly scoured the island looking for these, making very little headway.  But each time, the sense of satisfaction for solving or finding something was palpable.  High fives and shouting!  And then there were times where we KNEW something was a puzzle waiting to be solved but couldn't figure out the right angle to look at it from to make it work.  And then Armand would say, "Wait.  Try going over there."  And bam.  Solved.

It was a riot.  For real.  I desperately want to dive back into this world.

Currently it's available for PS4 and PC.  Xbone?  Maybe Xbone.  I've read there are plans of bringing it to iOS and Android.  That could be really neat.  I'm thinking I'm going to buy my own copy of this soon.  It's too good to pass on.  If you like puzzles and don't mind occasionally walking away frustrated only to have an AHA moment later, do yourself a favor and buy this.

OUT
Posted by Viewtiful_Justin at 11:13 AM

This post seriously has me questioning my disaffection for video games. I haven't played a video game in earnest since the days of Atari consoles and cartridges. Early 80s, no doubt. My favorite then was Missle Command. And a friend of mine had a castle game that three of us collaborated to win. Good times, good memories, long ago in a youth I have almost forgotten… Maybe I'm missing out on something—on iOS, current game stations, Mac, what have you… You have me thinking. I have invested in iOS games I don't play. Maybe it's time. Thank you.

Hey, any time. I have played video games my entire life. Some years the video game bug seems to be in hibernation. But occasionally a game comes out that I just go nuts over. This one fell somewhere in the middle of that spectrum til I actually started playing it. I have to buy my own copy if I don't get it for my birthday on Monday. I have an almost physical need to get back to that colorful and engaging world and start solving puzzles again.