I was searching for a photo to put up here.  It seems I don't post many anymore.  While I was looking, I realized why.  I don't take as many pictures as I used to.  And when I do?  Mostly friends or random stuff at work.  And all those random money shots from work--let me start over.  All of those random pictures of money from work are going to be in a book someday, a book about things people write on their money.  Ha...money shots.  That's gotta be the title of this blog!  *changes title*  Ahem...anywho...money.  Writing...blah...

You want a sample?

I get things that surely have a back story, such as this: 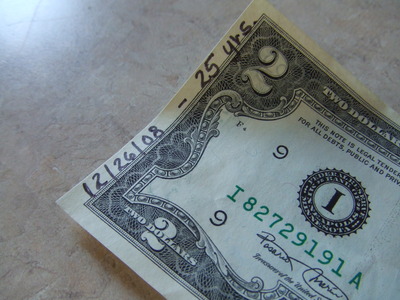 The writer in me hates finding these because I never get to learn what the story is. 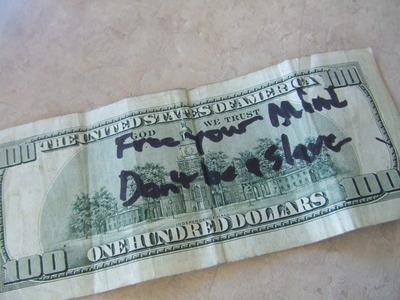 It says, "Free your Mind Don't be a Slave"

And then there's political psychopathy: 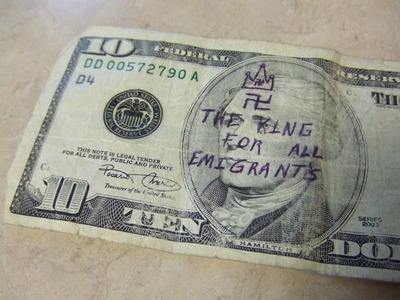 Apparently Alexander Hamilton was the King for all Emigrants?  And had something to do with the Nazi regime?  The history books never taught me that one...maybe because they weren't written by raving psychopaths.

So...yeah.  I've been collecting these for as long as I've been working with money.  I want to publish them in a book.  All the phone numbers and well wishes, the rantings and the odd stamps...compile them all and put it out there for the world to see.  And who knows, maybe people will start sending me bills they find, sort of like Post Secret, but with money.  I'd much rather get money than postcards!

Posted by Viewtiful_Justin at 1:42 PM

Oh, I love the title of this post. You should name your book that, too. I'll buy a copy--just let me know when it's out :)

I love your book idea and would totally buy it! I agree that it is frustrating to read things on money and not know the story behind them. Perhaps if you published your "Money Shot" book people would contact you to share their stories.

It's a great idea for a book. How often do you find notes like that? In Germany people hardly write on their money ...

Oh, I'd definitely call it Money Shots. What better way to getp eople's attention. And all the bills with phone numbers I would most definitely call to get the story behind it.

And PepeB, I find stuff like that almost every day. I see a lot of money in a day, working at a bank.

That is a great idea for a book! I wanted to do a similar thing with something that used to happen at work. We had a system whereby customers could text in payments for things. Sometimes, they'd get their numbers mixed up though and send a text to us which was clearly intended for someone else. Some of them were hilarious - others rathr creepy, but we always imagined there must be a whole story there somewhere.

I love that idea, too!